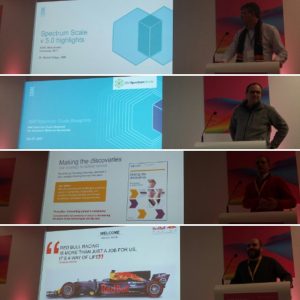 Well that’s it for the user group in 2017! The last event of the year was held as part of Computing Insights UK (CIUK) in Manchester this week. CIUK is a much smaller event that SC or ISC, but its where the user group’s roots are. In fact, the user group on 12th December 2017, was the 7th birthday of the group which held its first meeting (of about 8 people) at MEW (the forerunner of CIUK).

Since then the group has grown, and whilst the CIUK meeting is never as large as the main events, we still had 20-30 attendees.

Claire and myself opened the session with the usual welcome and outline of the group. Daniel Kidger followed up with an overview of the (soon to be released) 5.0. In his talk, he emphasised that there is no change to users with the license model, i.e. standard edition will stay as sockets and Data Management edition as capacity. Rather than go over in detail Dan’s talk, you can check the slides out online.

Ulf Troppens, our IBM user group advocate then followed up with an outline of the just published “IBM Spectrum Scale Blueprint for Genomics Medicine Workloads”. This is about 9 months work with a cross-group team to develop some best practices and performance tuning suggestions to aid in the deployment of Spectrum Scale for this type of workload. A couple of take-aways which I thought important:

The full (>150) slide deck is available and the Redbook is on the IBM website.

We then finished off with 2 user talks, the first from Robert Horton from Institute for Cancer Research on their research data storage platform. Robert talked us through their architecture and some of the challenges they are facing with deciding which data to tier out. Finally, John Brooks from Red Bull Technology gave us a high level overview of the Spectrum Scale deployments used to support their operation.

Thanks to both Daniel and Ulf from IBM for coming along and supporting the group, and especially to Robert and John for agreeing to give user talks!